Dr. Sarah Norris discusses her experience working with and interviewing Tinley Park and Nazareth Academy highs schoolers for Live from the Morgue.

In the time of the #NeverAgain and #MeToo movements, the children of Generation Z are being forced to grow up faster than we ever thought possible. But do they fully understand the implications of events taking place in this day and age?

During my medical school rotation with the Autopsy Center of Chicago, I had a chance to explore this issue. I interacted closely with high schoolers through the Center’s social-educational program, Live from the Morgue. The program provides a unique opportunity for high school students to learn about death and dying. My role included collaborative pre-event meetings with school educators and students, engagement during the event and post-event follow-up.

As with any assessment, objectivity is key. To keep my perspective, I had to reflect on my own views of high schoolers. Walking into each high school, I was transported back to my own teenage years — halls lined by lockers that are still not much taller than I am, the pressures of coursework (I was a good student) and endless hours spent at the pool for swim team practices. What are the adjectives I would use to describe high schoolers? Selfish, whiny, immature, self-absorbed, partiers, liars, curfew breakers are a few. In my world growing up, most teenagers had not experienced the world or been confronted with adult responsibilities. The biggest worry they had was whether they would win the Friday night football game, how fast they would get their license and if they would be asked to prom.

Once inside the classroom, I was brought back to reality as the high school biology teacher introduced me to the class as “Dr. Sarah Norris”. I felt a calm wash over me as I realized how far I had come since I sat in the same seat as these students not so many years ago. The pressures that felt monumental then now seemed insignificant, replaced by the new ones. Where will I match for residency? How do I pay back my medical school loans? I started the discussion open. Focusing on death, autopsy and health, the hour blew by.

A main point of discussion was the role the media plays in our society– portrayals of death and dying in movies, television, video games and newspapers. The majority of the students had seen a dead body in some capacity — at a wake, on a field trip, on TV. Three of these students cited television as a factor in their comfort viewing Live from the Morgue’s autopsy footage (see box below). The most common feeling students reported about their upcoming viewing of an autopsy was “excited” and “curious”. Almost 30% of students that participated had no reservation about seeing a dead body at Live from the Morgue. Some students seemed less comfortable discussing emotions and preferred to view the body as a machine — death as the failure of the body. The “organs shut down”, a person “stops breathing” or “the heart stops so the brain can’t receive blood or oxygen”. There seemed to be a mix of readiness to discuss feelings.

Taking the discussion closer to home, I expanded the discussion to the Florida Parkland High School shooting. Most students viewed death and dying as belonging to the old, where they felt it was more natural and understandable, although still sad. With the Parkland shootings in mind, students felt that when younger individuals die they are robbed of their life. The students all described feeling sad about the event. The tone in the room was solemn and more emotionally charged now. The students talked about the victims as peers and worried that next time, it could be them. One student stood out in another direction, sharing that she would not be scared and would not worry about herself, but for her friends and family. She expressed an acceptance of death as a natural part of life and was not scared of it.

After discussing death and dying – and to explore their understanding of the connection – we talked about what it means to be healthy. All students mentioned in one way or another about eating well, exercising and getting enough sleep. One student asked about the role of mental health in physical health. Most students did not correlate the consequences of their current health choices with subsequent disease and ultimate death. Only four students addressed specific diseases caused by specific health habits and lifestyle choices, such as poor diet leading to increased cholesterol and atherosclerosis, smoking causing cancer and alcohol causing liver disease.

Overall, the students appeared to display some degree of emotional conception of death and health, while some tended to focus on concrete representations. Responses were more emotional when presented with a “relevant” event such as the Parkland shooting. Not surprisingly, the most moving part was that discussion. The one young woman’s altruistic response was a standout. Her comment made me step back. Here was such a young woman, comfortable with a topic many find scary. How did I think about death at that age? How do I think about death now?

From one end of the class to the other, nearly all students participated, engaged and took the discussion seat to seat. That was most impressive overall. The group was ready to engage and did so without any “adolescent” testing, attitude or flippancy. This general attitude of readiness to engage spoke to the maturity level of these individuals. They were not whiny, sneaky high schoolers. They were high schoolers wrestling with issues and participating at whatever cognitive level they were able. The world has changed in the short while since I was in high school. And it has changed the students. Perhaps they are ready for it.[/two_third] [one_third_last] 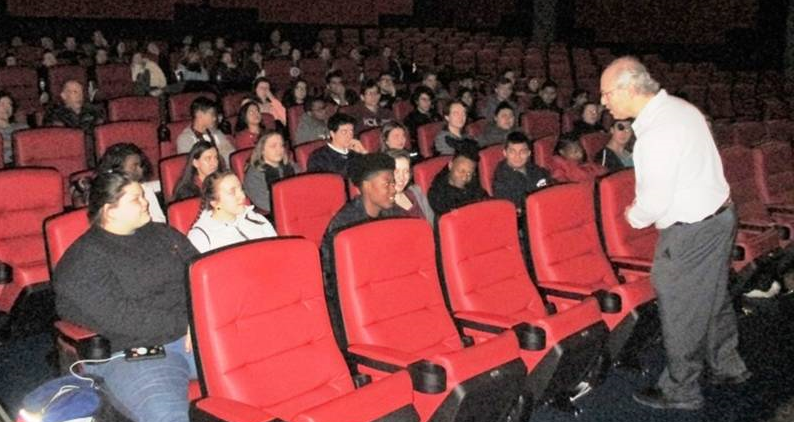 Students at Live from the Morgue discuss all things autopsy with Dr. Margolis.

Inside Live from the Morgue
Live from the Morgue is an educational field-trip for high schoolers focusing on the autopsy. (There’s an online option). Students are ushered into the overstuffed theater seats where they meet the students of other schools, the familiar venue of the movie theater quelling nerves a bit. After a brief introduction by Dr. Margolis and a head-on question posed to the group, “who’s seen a dead body?”, the tone is set. A representative from each school reads a prepared statement on death and dying. Then, the group views a prerecorded video of an autopsy which the doctor narrates live. A wall besides the movie screen serves as a makeshift screen for the group’s twitter comments. The event ends with a barrage of Q&A, student’s hands going up and the event running over. It is a whirlwind introduction into autopsy medicine and compassionate grief work.

How do you think your experience at the morgue would have been different if the case were that of a younger patient?
Could have been me/peer (11), No different (8), Depressed/sad/missed out on life (8), Hard to watch (6), Other (10)


What parts of the autopsy did you find to be…
Gruesome: Y incision (10), How the brain was removed (8), How organs were removed (5), Appearance of fat (4)
Interesting: Color/cutting of organs (7), Brain removal (6)
Frightening: Sound of bone saw (2), Initial cutting of body (2)
Emotional: Cause of death (1), How body was emptied of organs (1)
Surprising: How easily fat and skin peeled away when cut (8) [/two_third]