Background: The case is of an elderly man with sudden onset of left hip pain. He was diagnosed and treated for arthritis, but died two weeks later. The body is oriented diagonally in the photo. The head would be at the upper left and the feet at the lower right. The star shows the inside of the rib cage. The heart and lungs have been removed. Most of the abdominal organs have already been removed. What happened? What caused the man’s symptoms? Why did he die? 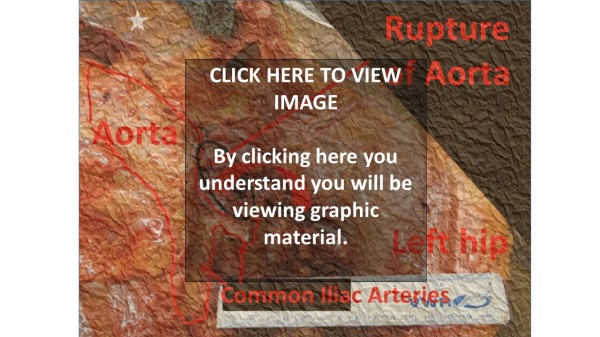 Discussion: The patient’s aorta ruptured just above where it branches near the pelvis. This branching is called the aortic bifurcation. The aorta ruptured (black oval) towards the left hip, sending blood (curved arrow) towards that side of the body and causing the patient’s discomfort around the hip.

Isn’t aortic rupture serious? Why didn’t this patient die right away from bleeding? The patient did not die suddenly because the rupture was partly contained inside the nearby tissue. The blood did not freely enter the abdominal cavity — which could have been an immediately life threatening event. Instead, the blood tracked and pushed into the pelvic tissue, the upper leg tissue and around the hip. The patient was mistakenly thought to have had arthritic pain, but the pain was, in fact, from the pressure of blood in the tissue around the hip.

Below is a diagram of the anatomy we are talking about.

Why did the patient die? The patient did not lose enough blood to die from bleeding. Instead, he developed an abdominal infection on top of the rupture and that caused him to die.