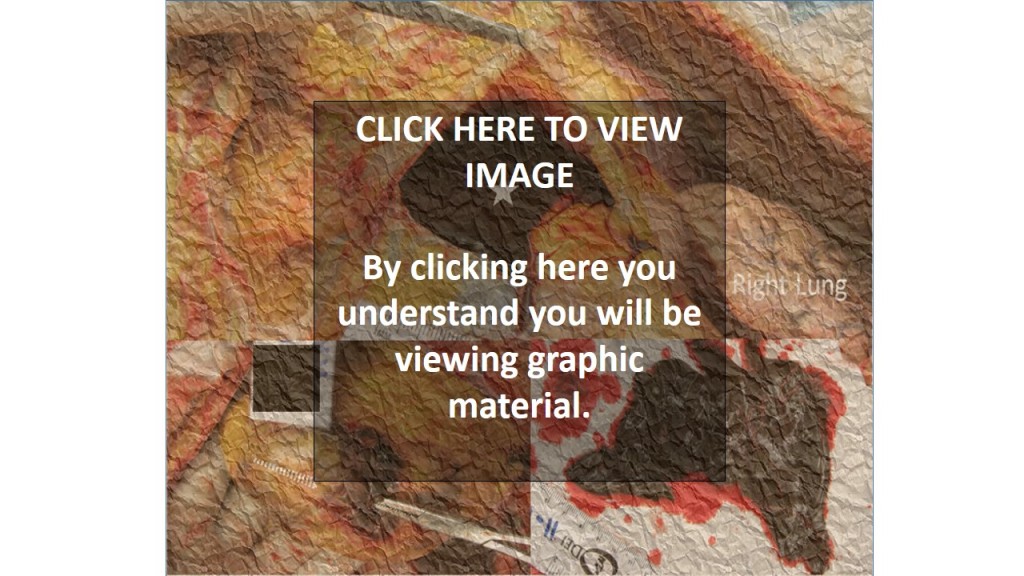 What is shown?   The top photo shows the sac around the heart (pericardial sac) cut open and lifted to expose the sac filled with blood (star).  The right lung is seen on the right.  On the bottom left is the heart.  A clamp has been inserted into the site of rupture.  The tip of the clamp (actually inside the heart) is illustrated with dashed lines.  On the bottom right is the clot that had escaped from inside the heart into the pericardial sac.

What was the history here?  This was a functional, active elderly woman who was days earlier released from the hospital after a heart attack.  She collapsed at home.  Paramedics were called and performed CPR, but she could not be resuscitated and died.

Why did the family request an autopsy?  The family was concerned that the mother died shortly after hospital discharge.  They wondered if the hospital had released her “too soon” (i.e., that she should have stayed in the hospital for her safety and monitoring).

What happened here?  The heart broke open (ruptured) causing blood to escape into and fill the pericardial sac.

How did the autopsy help?  The finding of heart rupture from the autopsy was new information for the family.  Families often wish to know if “everything” was done to save the patient.  Since heart rupture is severe and often causes death, it was clear that resuscitation efforts would not have resulted in “bringing back” the patient.  “If only” concerns (e.g., “if only they had worked on her a little longer”) could be laid to rest as continued CPR would not repair a rupture.  The autopsy also served to exclude other unanticipated causes of death (e.g. pulmonary embolism) and validated the family’s concerns regarding the heart itself.  Thus, the autopsy’s definition of the medical issues allowed the family to move forward. Lastly, considering the complex processes here (the patient’s disease, hospital care, hospital discharge planning, cause of the collapse, timing and need for CPR, and heart rupture) allowed for a thorough discussion of the medical issues – always important in the bereavement process.

Note:  CPR is and remains an important and life-saving measure.  CPR-related heart rupture is rare.